The Only Time to Eat Diet Food is

While You’re Waiting for the Steak to Cook

If indeed we are what we eat, then I have no idea what I am. Judging by my time spent this past summer at camp I should likely be some variation of cooked pasta.  Until I witnessed with my own eyes the sheer quantity of pasta these young campers consumed on a daily basis.

I had no idea how versatile a staple the humble noodle could be – served with or without cheese, maybe with a touch of ketchup, or simply naked, pasta must certainly rank as the most gratifying food on the planet.  Add French fries to the mix, and for most of the campers you would have the perfectly balanced meal.

For most of us post-campers, however, we try and at least pay some form of lip service to the concept of a healthier diet. Our brain certainly understands that we should be eating more nutritiously; it’s just that the rest of the team can’t seem to get on board with the program.  I’m no exception; grilled cheese on whole wheat definitely works for me.  In a perfect world where cholesterol is optional, I would definitely be some sort of deli sandwich, preferably one from Lefty’s delicatessen on York Street in the Hamilton of my youth.  I’m not sure why the joint was called Lefty’s- most likely it had to do with his last name being Boselavsky, which was probably unpronounceable to most of his patrons.  Kashrut standards back then were not what they are today – the owner was a member of our synagogue so that was good enough for my family.  Lefty’s corned beef and pastrami served up with a kosher dill on the side – perfection on a plate.  For many years I have sought to duplicate that mouthwatering taste, but all in vain.  This summer was no exception.

With two weeks to spend in America after the end of camp, Lori and I embarked on an odyssey of gastronomical tastings.  I mean we logged some serious miles in search of a good meal.  Our first mission – to discover if American kosher beef is really as satisfying as it is hyped up to be.  Surprisingly enough, it is.  There were lip smacking BBQ ribs from Smokey Joe’s in Teaneck, NJ to swoon for and BBQ brisket and chicken at the Southern New England Kosher BBQ Championship that were well worth the wait in line.  Thousands attended this one day event in Connecticut that was won this year by a Chabbad rabbi from Kansas City – go figure.

Americans really love their beef and are proud to show it off.  As far as my long awaited deli sandwich which we reserved for our last night in the U.S. of A., sorry folks, it was tasty but it didn’t hold a candle to my beloved Lefty’s.

Lest you think we were unrepentant carnivores on our journey, the most surprising fare that we sampled this summer happened to be vegan and vegetarian.  I kid you not.  Lori schlepped me on three subways plus a walk of ten city blocks on Manhattan’s Upper West side just to dine at some trendy vegan establishment called Blossom. 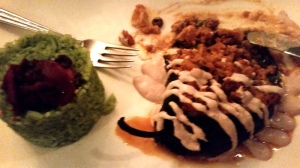 I’m still not sure what it was that we were served that evening, but whatever it was, it was beyond outstanding.  This was definitely not my bobbeh’s ta’am.  Then there was Tiffin Wallah on East 28th St whose authentic vegetarian Indian menu had us so enthralled that we dined there four times! 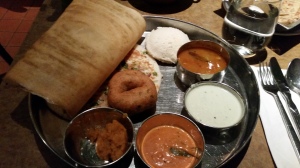 We’re talking about lentils, chickpeas and rice that are somehow magically transformed into dishes that should satisfy the heartiest of appetites.

All of which gives me cause to believe that there is life beyond a medium rare entrecote.  Healthy food can be fun and delicious if you keep an open mind to trying new foods; otherwise you will miss out on some of life’s true pleasures – pleasures such as the exquisite cashew cream sauce served at Blossom.  I am not quite ready yet to forgo the pleasures of a great pastrami sandwich but if someday I have no choice, I think I’m pretty much good to go.